Responding to the afflatus sublime (and a brief set by Manchester Modernist Society), design students Dan James and Jack Sanders from Manchester School of Art recently collaborated with MMS on the creation of an exclusive Toastrack Ale.

The designers referred to archival material discovered throughout the Modernist Society’s creative residency at the Hollings Faculty, as well as paying homage to the design and typography of the 1960s.

With ale donated by Moorhouse’s Brewery, the team set about producing the special edition ale for 52 Slices Of Toast, a commemorative event held to celebrate the history of the Toastrack. They also threw in a hand-printed beermat for good measure.

Dan James explained: “It’s not often that you get a brief that asks you to create designs for a special edition ale, and for me and Jack, it was something quite different to briefs that we’ve done in the past.”

“Working closely with Hollings and the Manchester Modernist Society, we felt that the building deserved an iconic send-off design. Referencing typography from the era in which it was built and attaching a motif to the bottle, our aim was to make it synonymous with the building. Of course, we couldn’t forget about a quote from city architect, LC Howitt.”

“The approach that we took was to have all the designs for the project printed ‘in-house’ at the Manchester School of Art. Printing it ourselves was really special to us, as we felt that it needed to be personal and almost hand-made. People thought we were a bit mad knowing that we were screen-printing 170 beer mats on our own, but we didn’t want to do it any other way.” 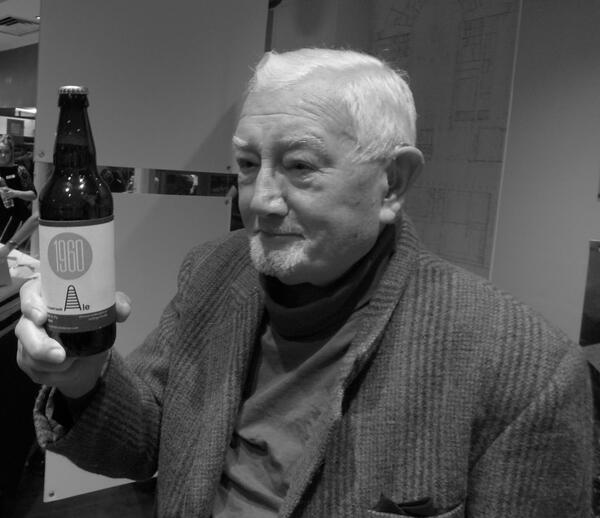 Guests at the event were honoured to be in the generous company of Derek Hill, the Toastrack’s principal architect (pictured above).

To our Modernistas, we raise a toast.